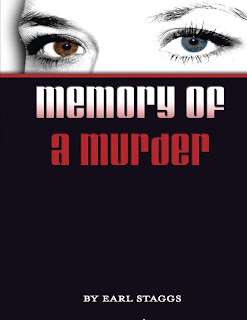 Mystery author Earl Staggs recently received his second Derringer Award for Best Short Story of the Year. His novel MEMORY OF A MURDER earned a long list of Five Star reviews. SHORT STORIES OF EARL STAGGS, a collection of 16 Mystery tales, is available in print and ebook. He served as Managing Editor of Futures Mystery Magazine and as President of the Short Mystery Fiction Society. He’s a contributing blog member of Murderous Musings and Make Mine Mystery and a frequent speaker at conferences.

LIVING WITH A HOOKER

When my wife retired, she nearly went out of her mind. She was used to her routine. Up at 4:30, at work by 6, work all day, usually through lunch, and home about  5:30. Then it was time for dinner, a little TV, then off to bed.

After she retired, she had nothing.  She didn’t have to get up in the morning at any special time. She had nothing to do all day and nowhere to go.  She’d clean house, do laundry, and run out for a little shopping.  There’s a limit to how much you can do of those things. Especially that shopping thing, unless there’s no limit to your income.

So that left her with a lot of time. And you know how women are. A lot of time filled with boredom, frustration, and too much quiet can have an effect on their personality and attitude. They tend to get, shall we say, testy.

“Carol.” I said quietly one day, “maybe we could look around and find something you’d be interested in doing, like a hobby.”

I zipped my lip, licked my wounds, and said no more.

A week or two later, however, I tried again.  We were watching a TV show where women were talking about how they filled their spare time. “Hey,” I said, “there’s something you could do. Why not give it a try?”

A few weeks after that, Carol came across Linda, a woman she’d known from church a few years before. Linda told her how she and a bunch of other women met two or three times a week at a yarn store called The Knitting Nook. Some knitted and some crocheted, and they sat around a table doing that.  And talking, of course.  You know how women are. Linda urged Carol to go with her and check it out.

Carol went along and liked it. She’d done a little crocheting before and picked it up again easily.  Before long, she was turning out scarves, hats, potholders and placemats.  From there, she advanced to sweaters, baby blankets, dolls, and even jewelry.  While she had once sat around the house, grumpy and grousy because she had nothing to do, now she’d crochet non-stop.  She even became a teacher. When someone came into the Knitting Nook and wanted lessons, Wanda, the owner, referred them to Carol. And, yes, she got paid for teaching.

So, all was good.  Carol had found something to do with all those free hours, and she was good at it.  She was very happy.  I was happy, too.  Now we had normal conversations around the house again.

Sadly, Wanda decided to close the Nook.  Ever resourceful, however, Carol suggested they take turns hostessing the group at their homes.  That worked out great.  Even Wanda joined in.  Now, they meet twice a week at different houses.  Carol has them at our place every other Thursday.

I knew nothing about knitting or crocheting, but I learned one thing.  Knitters use needles, and crocheters use hooks.  That’s why the group adopted the name “The Happy Hookers.”

And that’s why I say I live with a hooker. 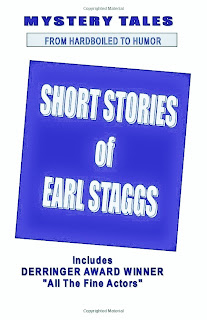 Now, you’re invited to visit my website at http://earlwstaggs.wordpress.com where you can:

. . .read Chapter One of my Mystery novel, MEMORY OF A MURDER.

. . .read a short story called “The Day I Almost Became a Great Writer.” Some say it’s the funniest story I’ve ever written.

. . .read “White Hats and Happy Trails,” a story about the day I spent with my boyhood idol, Roy Rogers.  There’s even a picture of my wife and me with Roy to prove it’s all true.

. . .check out SHORT STORIES OF EARL STAGGS, a collection of 16 of my published tales of mystery, ranging from hardboiled to humorous, available in ebook or print form.

But you can’t go yet. Please leave a comment while you’re here and you may win a free book. 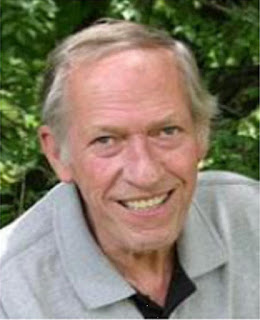 At the end of the tour, I’ll draw two names from those who left comments.  The first name drawn will receive a signed print copy of MEMORY OF A MURDER, a mystery novel with a long list of Five Star Reviews.  The second name drawn will receive their choice of a signed print copy or an ebook of SHORT STORIES OF EARL STAGGS, a collection of 16 tales of mystery from hardboiled to humorous.

Thank you, Larissa, for letting me stop by here to talk about the craft of hooking. And thanks to everyone who came by.  I hope you’ll leave a comment before you go.

Posted by Larissa Reinhart at 12:01 AM