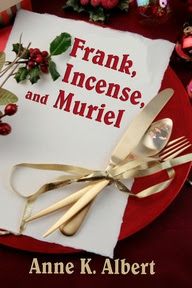 My guest today is Anne K. Albert. Anne’s award winning mystery and romantic suspense stories chill the spine, warm the heart and soothe the soul…all with a delightful touch of humor. When not at the keyboard she loves to travel, walk on a beach, visit friends and family, and of course, read using ‘Threegio’ her beloved and much cherished Kindle 3G. She can be found online at Facebook, Twitter, Google+, LinkedIn, Goodreads, Pinterest, Amazon and her blog.

Thanks for featuring me today, Larissa. You requested a food related post, and that fits perfectly with Frank, Incense and Muriel.

The story takes place the week before Christmas when the stress of the holidays is enough to frazzle anyone’s nerves. Tensions increase when a friend begs Muriel to team up with a sexy private investigator to find a missing woman. Forced to deal with an embezzler, kidnapper, and femme fatale is bad enough, but add Muriel’s zany yet loveable family to the mix and their desire to win the coveted D-DAY (Death Defying Act of the Year) Award, and the situation can only get worse.

It does get worse, of course, when Muriel’s aunt decides to bake sugary treats based on the twelve days of Christmas. Here’s what happens when she and Frankie first meet in Muriel’s kitchen. She studies him over the brim of her coffee mug.

I joined them at the table and made the necessary introductions. I left out the part about Frankie being my childhood nemesis and my aunt being one of the many black sheep in the family. Some things are best left unsaid.

“Salerno, huh?” Val pried the lid off the Santa container and offered us each a mincemeat tart.

Eager to try one, I readily accepted and carefully removed the turtledoves from their nest. I placed them on the paper napkin beside my mug, took one bite, and moaned.

“Omigosh,” I said. “These are amazing. Val, you’ve outdone yourself.”

Grinning from ear to ear, she held the tin under Frankie’s nose. “Are you any relation to the Salerno who handled the Brickman fiasco a few years back?”

“That was my first case.” He…helped himself to a tart and following my example removed the turtledoves and placed them on his napkin. He sunk his teeth into the tart and I watched spellbound as a look of utter satisfaction spread across his face. He caught my gaze and I realized that at least we agreed on one thing. My aunt sure could cook.

“I never liked that guy,” Val said. “What was his name? Logan? Locust?”

“Whatever.” She took a bite. I watched in horror as the tiny head of one of the turtledoves disappeared inside her right nostril.

“He was far too polite for my liking,” she said, her voice an octave higher than normal. “It wasn’t natural.”

I breathed a sigh of relief when the turtledove freed itself and plummeted head first into her mug. Coffee sloshed over the rim and onto the table like a mini tsunami.

Never one to mince words, Val later points her finger at Frankie and asks if he came to the house to ask Muriel out on a date, but once again the conversation turns to food.

“I’m doing a culinary version of the Twelve Days of Christmas. Only I’m fast-forwarding it into six days because of time restraints. Today is day one and two. Tomorrow day three and four. I’ll make lemon bars and cut them into the shape of French hens. But they’re really, really small, so three should equal one serving. That translates into Three French Hens! Get it?”

She cut him off. “There’s only one problem. I have no idea what to do for Four Calling Birds. Any suggestions?”

To my amazement, Frankie actually seemed to think about it.

“Hey!” I rapped my knuckles on the table so hard I feared I’d be bruised by noon. “Can we get back to the business at hand?”

Above the rim of his mincemeat tart--I might have lost count of how many he’d eaten if not for the gaggle of turtledoves heaped on his napkin--Frankie stared at me as if every taste bud in my head had suddenly vanished.

The grim look on my aunt’s face wasn’t much better. I felt like a gastronomic Grinch. 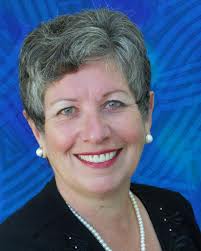 Baking, Christmas and a good mystery seem like a natural fit to me, Larissa. Thanks so much for giving me the opportunity to chat about it! Readers can enter my giveaway contest. Up for grabs is an e-copy of FRANK, INCENSE AND MURIEL. Leave a comment and you're automatically entered. The winner will be chosen at random and announced on my blog on December 11, 2012. Good luck!

Thanks Anne!
Posted by Larissa Reinhart at 12:01 AM