We really loved living in Japan. My wife Palmarin and I met there, it’s where I launched my career, and where I made the best friends of my life. To say that was a “special” time is a vast understatement: it was THE seminal experience in my adult life, and I wouldn’t trade the experience for anything.
That said, after 5 years in Japan we’d reached the point where things weren’t fun and exciting anymore, and we were eager to come home -- a state many of our expat friends said they were in as well. Most of us expats were eager to get on with the next stage in our lives: many were heading into graduate school, others were making career changes, and still others were just looking forward to getting away from the high cost of living and crowded conditions of Tokyo. Just before I left, I had lunch with a friend, Brian, and the topic of what it would be like to move home came up as it had with so many expat friends. He asked me that day to write about my experience re-assimilating once I got back home. So, after postponing this missive for 15 years, I’m finally writing about what I learned as a former expat. Sorry for the delayed response, Brian!
When we moved back, we really enjoyed the things we had missed: easily accessible outdoor activities, low-cost options for nearly everything, and the career/ education opportunities. I have no regrets about living in Japan, nor about moving back when we did. But I found it hard to answer Brian’s question, “what’s it like to move back,” at least at first. I remember trying to write this article in the months after moving back, but then concluded that I just didn’t have enough perspective yet. It seemed I needed more time after the “honeymoon period” of moving back home had worn off to really make an account.
What I remember the most was how ill prepared – psychologically – we were to make the move. In some ways we felt it would be very easy slotting back into the US lifestyle, and in many ways it was. Still what we didn’t realize is that to move “back home” is as stressful as any move ever is. All the anxieties, transitions and adjustments that come with moving from one country to another (or even one city to another) still apply when you move back “home.” So if you’re an expat who is planning to move home soon, get as mentally ready as you would for a move overseas. Even if you’re moving back to the same home you lived in before, your neighbors may have changed, the neighborhood may have changed, familiar places you once knew will probably have changed. And, the people you knew have probably changed too.
I have to say that one thing was a little disappointing: how little most people – both educated and not-so-educated – cared or “got” what a life-changing experience living overseas was for us. Shortly after returning I was having lunch with a friend and I mentioned what a large transition it was to move to Japan, adjust to life there for 5 years, and then move back home. He attempted to empathize, saying “I know what you mean. It was a huge adjustment for me when I moved from LA to San Francisco.” Wow, I didn’t say. It isn't like that at all. And I wonder if anyone really can "get it," unless they too have been there ... and back again.

I took the kids to see The Secret World of Arrietty this weekend. I'm not sure how American kids will respond to the movie, but I loved it. The film is beautiful and paced for exploring the studio's artistry in creating the lush landscape and detailed settings. My kids enjoyed the story, but they really enjoyed seeing Japan through the movie even more.

The Borrowers by Mary Norton was one of my favorite books growing up. I longed to shrink into their little world and drink tea from thimbles and eat off of buttons. I don't know why the world of itsy bitsy holds such pleasure for children (maybe our desire to be bigger than something else?), but I couldn't get enough of The Borrowers world and read every book in the series available at that time.

In 2010, Hiyao Miyazaki's animation studio, Studio Ghibli, released Arrietty The Borrower in Japan. Studio Ghibli's best known film in America is My Neighbor Totoro. We were still living in Nagoya at the time and visiting a wonderful park, Mori-koro Park. One of their halls had a Studio Ghibli exhibition with drawings and posters from all the Studio Ghibli films as well as three-dimensional mock-ups of Arrietty's film set. I was thrilled to see one of my childhood books made into a movie by an animation studio that I admire.

Now that it finally came to the U.S., I took my girls opening weekend hoping they would love Arrietty's world and want to read the book. They've watched several Studio Ghibli films, Totoro is a favorite as well as Kiki's Delivery Service (adorable) and Ponyo.

The movie started and the girls gasped, "Look! Arrietty lives in Japan!"

I hadn't counted on the Japanese background in watching the movie. The girls were taken with the everyday items of Japan more than the story of the Borrowers. Arrietty's house is under a futon closet. Her mother makes green tea. The sugar borrowed is cubed, not so unusual, but completely normal in a Japanese sugar pot. Signs are in Japanese. My kids even recognized the kind of car Shawn's grandmother drives. The crow in the movie is as much of a nuisance as crows are in real Japan.

As I watched, I realized the Japaneseness of Studio Ghibli's stories may be one of the things I most love about their films as well. It's nice to revisit places you love in films. Even when you're not expecting it.
Posted by Larissa Reinhart at 12:00 AM 4 comments:

Chicken & Rice: What Else Do You Need?

QUICK AND DIRTY WEDNESDAY
CHICKEN AND EGG ON RICE: OYAKODON

How many countries have a classic chicken and rice dish? I know one of my favorite meals at my friend's house is arroz con pollo, rice and chicken.


My taste buds melt at the thought of arroz con pollo...


As I write, my stomach is making a noise similar to a lawnmower hitting a chunk of wood. That's how good it is. And maybe she'll share the recipe (hint, hint) for the blog. But I've got another chicken and rice dish for you, another recipe I've brought home from Japan. This is my go-to meal and a family favorite. It’s simple, fairly healthy, and very cheap to make.


Oyakodon literally translates as parent and child (oyoko) rice bowl (don), but the basic translation is chicken and egg on rice. A very traditional meal that you can find in many restaurants and homes in Japan, this is another simple and delicious Japanese dish that doesn't involve raw fish.


One of these days maybe  I'll slip raw fish into the mix, but I'd rather inspire you with these great comfort foods from Japan that are easy to make outside the country.


It should serve 4 people, but the ratios are easy to double.

Hot cooked rice (3-4 cups). Japanese rice is short grain, stickier and less dry than long grain. But use what you've got. That's my motto.

You can’t get much easier than that!

*To make it healthier, you could use chicken breast meat. Japanese people generally use thigh meat, but we’ve cooked with breast. Just be sure not to cook it too long.

Now it's your turn! Do you have a simple chicken and rice dish from your expat country or something similar? Let's swap recipes. Send it to me and I'll post it in a Quick and Dirty Wednesday.
Posted by Larissa Reinhart at 12:00 AM 5 comments: 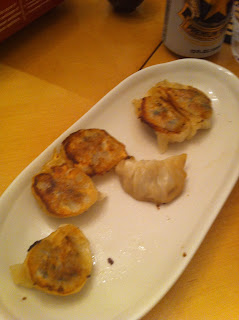 Today's "Quick and Dirty" recipe comes from my friend who hosted the Japanese New Year party I wrote about in the last blog entry. Her recipe is neither quick nor (in a Japanese kitchen) dirty, but so delicious I had to share. My friend warned me it took her an hour to make these by hand (and corrected my blog entry, she made 90!). For convenience sake, you can buy frozen gyoza in Asian food stores and other stores that carry Asian food, like Trader Joe's.

I'm also including my Quick and Dirty Gyoza recipe which begins with buying a bag of frozen, pre-made gyoza.

Like many foods in Japan, gyoza was imported from China and modified for the Japanese palette. We call them potstickers in the U.S. Similar to a ravioli, they are thin dough stuffed with filling, usually pork and vegetables, pressed to close and cooked. Chinese pan-fried jiaozi (guotie) tend to have thicker skins than Japanese gyoza and the fillings are slightly different, particularly the use of garlic in Japan. This particular form of dumpling is panfried and then steamed to finish, hence the translated name potsticker. 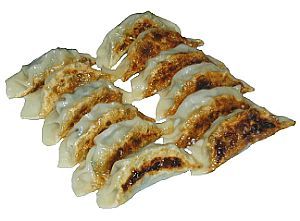 In Japan, gyoza is a common bar food, ubiquitous appetizer, readily found in Chinese restaurants, and so popular certain restaurants are devoted to that one food. One of our favorite places to eat was called Gyoza No Osho, "Gyoza King", a kind of Chinese cuisine diner. We ate at another gyoza restaurant that featured about thirty different fillings including cheeseburger and pumpkin. It's difficult to find gyoza of this quality in the U.S., so we are forced to make it at home. Just Hungry also has a good gyoza recipe.

True Quick and Dirty Gyoza:
Buy it frozen (directions are on the bag):

My husband likes to make it them a cast iron skillet for a crispier finish but any skillet will do.
Heat skillet on a medium high to high flame with about 1 T of oil.
Cook frozen gyoza until browned on the bottom.
Add 2 TB of water, cover, and turn the flame down to low for about 7-8 minutes.

If dipping sauce is not included in the bag, mix 2 parts soy sauce to 1 part vinegar, add hot chili oil as you like.

Not Quick but Truly Delicious And Worth the Trouble Homemade Gyoza:

Gyoza skins can be readily found in Asian grocery stores and large supermarkets. Caveat: wonton wrappers (often used for eggrolls and other kinds of dumplings) are thicker than gyoza skins. This recipe is for gyoza skins. The round packs come frozen or refrigerated. For 1 lb. of ground pork, you will probably need about 2 packs.

1/2 bunch of chinese chive or garlic chives (these chives have a distinctive garlic flavor rather than onion. If you can't find them, you can use green onion instead)

2-3 cloves of garlic, pressed or ground

1.Mince the chives and cabbage. Sprinkle with salt, toss, and set aside.

2. Using a large bowl, sprinkle salt and pepper on ground pork and mix well until sticky.

3.Squeeze out the chive and cabbage mixture tightly to remove as much water as possible and add to the pork.

5.  Quoted from my friend's recipe,

***I recommend to eat it the next day! You should keep it in fridge for 1night.***


6. Wrap about a teaspoon of the filling in a gyoza skin, folding diagonally and sealing edges by crimping or wetting with a dab of water. Traditional gyoza are crescent shape, but like ravioli, you could experiment with the shape. The key is to make sure the skin is sealed.

7. Cook as you like. (See Quick and Dirty recipe above, but steaming will be much quicker, 5 minutes or less). You can pan fry or use in a soup.

Posted by Larissa Reinhart at 12:00 AM No comments: