Announcing the first Goodreads Giveaway Contest to win a free, signed ARC of STILL LIFE IN BRUNSWICK STEW (Henery Press), the second in the Cherry Tucker series. Between March 14 and April 9, register for your chance to win one of ten Advanced Reader Copies. The release of STILL LIFE is not until May 21, so this is your chance to read a copy before it hits the stores. Click the Goodreads link below for more details.

Cherry Tucker’s in a stew. Art commissions dried up after her nemesis became president of the County Arts Council. Desperate and broke, Cherry and her friend, Eloise, spend a sultry summer weekend hawking their art at the Sidewinder Annual Brunswick Stew Cook-Off. When a bad case of food poisoning breaks out and Eloise dies, the police brush off her death as accidental. However, Cherry suspects someone spiked the stew and killed her friend. As Cherry calls on cook-off competitors, bitter rivals, and crooked judges, the police get steamed while the killer prepares to cook Cherry’s goose.

Giveaway ends April 09, 2013.
See the giveaway details at Goodreads.
Enter to win
Posted by Larissa Reinhart at 11:25 AM No comments: In the entertaining documentary JIRO DREAMS OF SUSHI (2011) we are ushered into the rarefied world of a sushi master where one perhaps suspects zen-like secrets of perfect sushi preparation will be conveyed in hushed tones and somber declarations. What we get is a portrait of a very typical Japanese man devoted to the old virtues of hard work, perfection, and simplicity.

Jiro Ono began working when he was 7 because he had to. His parents basically abdicated responsibility to support him and so he was forced into the world of work where he has remained to this day at the ripe old age of 85. He loves work so much he hates holidays and would rather be at his little sushi shop near a Tokyo subway station than anywhere else, including and especially his home, it seems. And yet he has a decent, if somewhat distant, relationship with his two sons, who have both followed him into the sushi business. But in this as in so many other ways he is a typical Japanese working man, if more of the old school than the current generation. His work is his life and it is what defines him, period. His devotion to his craft is admirable and, at the same time, ordinary in its Japanese-ness. He completely eschews the lofty pretensions and indulgent idiosyncrasies of the modern chef-cum-celebrity. He just loves making sushi and thinks incessantly of how to improve his product and how it is consumed (even to the point of dreaming about it).

Of course there is ample coverage on how he carefully selects fish and other ocean creatures, his rice, and how all of this is prepared. Most of the work is now done by his older son or his staff, but he still acts as a sort of master quality control engineer. One of my favorite tidbits was how he prepares octopus, which is notoriously rubbery. He solves that deficiency by having some poor apprentice knead and knurl the octopus for at least 45 minutes, by hand. My fingers cramped at the thought but my mind marveled at the elegant, if tedious, solution to the problem. The heart of the story for this man devoted to work is the relationship with his sons, especially his eldest, who has the heavy burden of taking over for Jiro after he leaves the scene. Their relationship is rooted in the business, but in Japan this affords them more time together than is typical. And they really seem to enjoy being with each other, exhibiting a comfortable ease with one another even as they know that the older son will be hard-pressed to successfully maintain his father's legacy.

I really enjoyed seeing the mundane aspects of Japanese everyday life and culture as experienced in Jiro's restaurant and was inspired by his commitment to perfection, quality, and giving joy to his customers.  I hope you enjoy it, too.


Trey Hoffman
After getting his M.A. in Japanese Art History, Trey Hoffman eschewed university life for Japanese business. He's worked for four Japanese companies in the U.S.; for a U.S. state office in Japan; and for a Japanese City Hall in the JET program. A father and husband, Trey enjoys teaching his kids about other cultures and introducing them to bizarre foods.

Posted by Larissa Reinhart at 5:30 PM No comments:

Available for Review: PORTRAIT OF A DEAD GUY 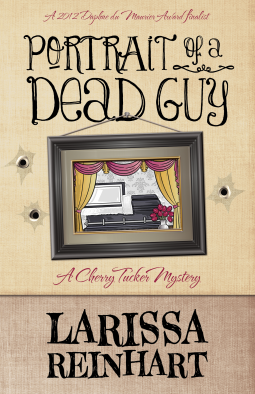 PORTRAIT OF A DEAD GUY (Henery Press, 2012) is now available on NetGalley for review in anticipation of the May release of my second Cherry Tucker mystery, STILL LIFE IN BRUNSWICK STEW. If you are a reviewer that would like a free copy digital copy of PORTRAIT, please send me your email address to be approved on NetGalley.

PORTRAIT OF A DEAD GUY
In Halo, Georgia, folks know Cherry Tucker as big in mouth, small in stature, and able to sketch a portrait faster than buckshot rips from a ten gauge — but commissions are scarce. So when the well-heeled Branson family wants to memorialize their murdered son in a coffin portrait, Cherry scrambles to win their patronage from her small town rival. As the clock ticks toward the deadline, Cherry faces more trouble than just a controversial subject. Between ex-boyfriends, her flaky family, an illegal gambling ring, and outwitting a killer on a spree, Cherry finds herself painted into a corner she’ll be lucky to survive.
https://www.netgalley.com/catalog/show/id/28389